Malcolm Goldring FRSA, a well-known and much-loved choral director active across the Midlands and beyond, was conductor of the RLSBC from 1988 to 1995. He is remembered with great affection by singers who were part of the choir during those years. The choir was very saddened to hear of his recent death from cancer, and we offer our condolences to his family.

Malcolm joined the Royal Leamington Spa Bach Choir in 1988, as fifteenth in a line of distinguished conductors. This was a very successful period in the choir's history, and the year 1993 was particularly exciting for us. Under Malcolm's leadership, we performed J S Bach's in Leamington Spa, toured a programme of European choral music to Paris and Southwell Minster (Notts), and made our dÃ©but at Symphony Hall, Birmingham, in a private concert for the British Veterinary Association!

We asked choir members who sang under Malcolm to tell us what they remember about him. Pat Kuenzler reveals how Malcolm was first persuaded to apply for the post... Pat and her friend Margaret Midgley, both altos in the RLSBC at the time, were also members of the Midland Festival Chorus, which Malcolm founded and directed. When Malcolm's predecessor at the RLSBC announced his intention to move on, Pat and Margaret thought how wonderful it would be if Malcolm were to become our next conductor. During the break in the next MFC rehearsal, they approached Malcolm and begged him to audition for the post, and he said he'd think about it. Pat concludes: "The rest is history - inspiring musical history!"

Malcolm was an immensely popular musical director. Marion Poulton says: "Malcolm always made singing such fun, and so enjoyable". Anne Perrin agrees: "Having Malcolm as Choral Director was the next best thing after singing under the bÃ¢ton of David Willcocks when I was a student. His high standards combined with consistent good humour made those seven years hugely enjoyable"Â. Jan Spalding, who joined the choir around 1992, says she liked Malcolm a lot: "He was a very popular conductor, really good at motivating the choir and would make us laugh. He could get the best out of us and had lots of energy"Â. Yet although Malcolm's emphasis was clearly on the enjoyment of music, he also worked the choir hard and had high expectations. Diane Woodward recalls how he wanted the choir to perform Mozart's without scores - she says: "Most of the choir embraced the idea enthusiastically, however at the last minute he relented!"Â.

Chris Spooner and Alec Coutts, among the longest serving members of the RLSBC, also recall Malcolm's time with us as hugely enjoyable; they say the choir was about 120 strong in those days. For them, as for many members of the choir at the time, the trip to Paris (on which the photograph at the top of this article was taken) was a particular highlight. During the trip, Chris learnt to love FaurÃ©'s (it still stirs her spirits, she says) - and also discovered that she liked olives! Fred Edgar has happy memories of lunch in the Pompidou Centre, prior to singing in the church where Saint-SaÃ«ns had been organist, and of singing in Les Invalides, where Charles Matthews on the organ was so far away that there was a significant time delay.

Andrew Mead, who was Concert Manager for the choir during Malcolm's time with us, remembers the concert in Les Invalides as a "one of the most stressful concerts I ever managed"Â, but he also recalls Malcolm taking members of the choir on a sight-seeing trip round Paris. Another of Andrew's memories is of a performance of Mahler's in All Saints' Church, Leamington Spa, when Andrew's task was to act "as the conduit between Guy Woolfenden conducting the WSO and Malcolm conducting the off-stage brass group in the Prior's Room, opening the door by degrees to control the volume!"Â.

There is a Malcolm Goldring Appreciation Society page on Facebook (Click Here), where you can read other recollections and tributes from many of the people whose lives Malcolm touched. Here at the RLSBC, we know we were extremely fortunate to have enjoyed his musical leadership for seven very happy years.

Masses for our time: RLSBC wows its audience 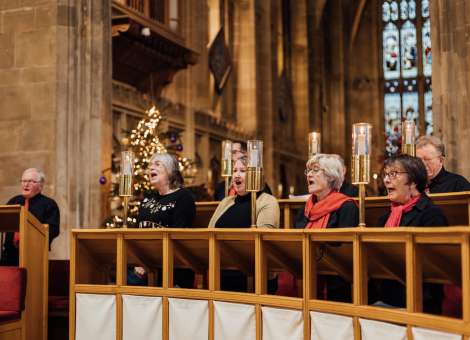 'A Bach Choir Christmas' celebrates the choirâs illustrious past

The RLSBCâs triumphant return to the concert platform

"We are a hard-working, ambitious choir, who also know how to enjoy ourselves."

THANK YOU TO OUR SPONSORS